January 05, 2016- Houdini Apprentice Free is a powerful cross-platform environment for three-dimensional modeling and animation. The software is available for PC, Mac OS X and Linux. The application is characterized by large functionality and the ability to apply broadly.

And it works equally well for beginners and more advanced users. One of the major advantages of a free (for non-commercial use) tools is the ability to import FBX files (3Ds Max). The free version has a limit as a watermark on the created overlay effects and the rendering to 720×576 maximum.
The latest edition of the program offers a number of improvements in outcomes and the ability to use the GPU for simulation. The effects of work are even more realistic, and the whole process faster and is easier to set up. Moreover, improved speed and stability of the application. 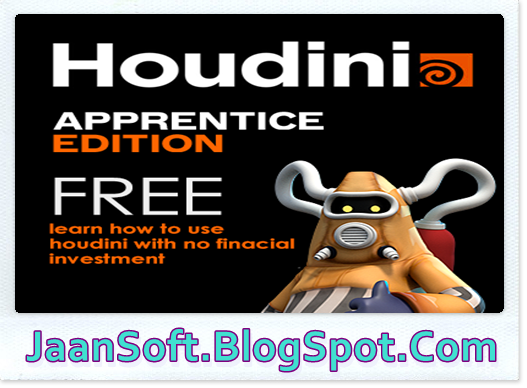 Houdini Apprentice Free is equipped with an intuitive and interactive channel editor timeline, which streamlines the process of creating animation. There was also a set of tools that allow for efficient modeling of very realistic clouds. You are creating environments, objects and characters we give realism thanks to advanced system design lighting.

The Software is available for downloads from the official website of the manufacturer.
Important Information Of Software